I’ve been thinking… about Walking the Talk

Jim Diers believes that New Zealand is paving the way in community-led development.

My work has brought me to 17 very different countries.

“I see a growing movement of community-led development everywhere but, in many respects, New Zealand is paving the way.”

There are stunning examples of community-led environmental initiatives such as Project Twin Streams in Waitakere and Greymouth’s conversion of a dump into a wildlife sanctuary. Schools like Victory in Nelson and Berhampore in Wellington are enrolling whole families and partnering with their neighbourhoods for mutual benefit. 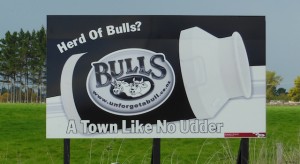 Communities are tapping into their unique assets   –  Bulls’ names and whale watching in Kaikoura for economic development. Through Common Unity Aotearoa, neighbours in Lower Hutt are collectively farming, cooking, sewing, knitting, repairing bicycles and keeping bees. An entire neighbourhood in Invercargill is being revitalised through the efforts of South Alive. Plimmerton neighbours developed and implemented their own plan. Lyttleton with its time bank, cooperative store, community garden, food forest and Gapfiller projects demonstrates the resilience of community in the face of disaster. Gisborne’s Kaiti neighbourhood is documenting community building as an effective approach to public safety while Tūhoe have shown the power of community to secure social justice.

These are only a few of the many inspiring communities I have visited in New Zealand, but there is the opportunity for so much more.

“What could be done to take New Zealand to the next level?” 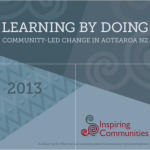 Ironically, the heading of this blog identifies one of the obstacles – “I’ve been thinking.” While some thinking is needed and we clearly don’t do enough of that in America, I often find that there is more talk about community-led development than action in New Zealand. Staff spend too much time in their offices with one another and their computers and not enough in the community. There are so many meetings, papers and conferences trying to determine the perfect strategy and too little recognition that the perfect strategy is one that is developed, understood and embraced by the community itself. Most community members don’t have the time or patience for theorising and endless discussion and planning. They just want to get on with it. And action combined with reflection is the best way to get it right. I prefer the title of the Inspiring Communities publication Learning by Doing.

A related obstacle is community development workers who act as leaders rather than as organisers. They ignore the Iron Rule of community organising; “Never do for people what they can do for themselves.” In their eagerness to help the community or to demonstrate their worth to those paying their salaries, too many are speaking and doing for the people. This is the opposite of community-driven development and it certainly isn’t sustainable.

“Staff must always ask themselves: “When I’m gone, will the community be better off or worse off because I was here? Have I built capacity or created dependence?”” 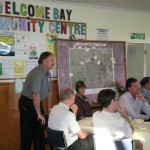 Likewise, New Zealand is fortunate to have a system of elected community and local boards that can bring democracy closer to the people, but they can also be a hindrance to community-led development. Too many of these local boards see themselves as the voice of the community when their real value is the ability to bring all segments of the community together to create and act on a shared vision. A mobilised community can have many more resources at its disposal and a much stronger voice with other layers of government, than any board will ever have on its own.

Another strength of New Zealand is that most fields understand the importance of engaging the community. The problem is that each field tends to do so on its own. Not only is the community overwhelmed by all of the opportunities to be engaged, but this siloed approach is also contrary to community-led development. Rather than trying to engage the community in the priorities of the many separate agencies, the agencies should be working together to support the communities’ initiatives which are typically more holistic.

Most of these obstacles aren’t unique to New Zealand but your country is in a good position to do something about them. You are relatively small in geography and population so it should be easier to coordinate across the silos and the different levels of government.

“More than anywhere else I know of, you have a respect for the ways of indigenous people which are so consistent with community-led development.”

You have a history of being a global leader with women’s suffrage and nuclear opposition; community-led development is the next frontier. And, you have the dynamic staff of Inspiring Communities to assist you as you move towards more holistic, nimble, sustainable and empowering ways of building on New Zealand’s greatest asset – its communities.

More on Jim Diers and his work.

How Communities Awaken is a series of essays written by vivian Hutchinson from Taranaki. Here we share the essays, alongside some insights and perspectives from Inspiring Communities team members.

We're here to help. Have a one-to-one chat with one of our lovely facilitators - for free!