Social Justice is Not as Easy as ABC

Jim Diers, renowned community-action collaborator believes that it's not enough to be community-driven: we need to ensure that those who are less privileged are in the lead.

In celebration of our 10 year anniversary (in 2018), we wanted to talk to experts who’ve been working in the field for a long time to get their thoughts on the state of community-led development and their ideas about what works best. Inspiring Communities has been working with Jim Diers since 2012. Over this time he has met with many communities, governments and local officials here and around the world. Here are his latest reflections, based on that experience.﻿

“…the notion that everyone’s glass is half-full reinforces the myth that we all have the same opportunities.”

As a proud practitioner of Asset-Based Community-driven Development (ABCD) and community-led development (CLD) approaches, I’m convinced that every person and every neighborhood has abundant and often underutilized strengths that can be mobilized to accomplish what is best done by community – caring for one another and the earth, promoting health, preventing crime, responding to disaster, creating great places, strengthening democracy and advancing social justice. But, I’m also aware that there is nothing inherently progressive about ABCD. In fact, unless an ABCD or CLD approach is accompanied by a strong commitment to social justice and an understanding of what that entails, it has the potential to exacerbate current inequities. Following are some actions to take and pitfalls to avoid on the road to social justice. 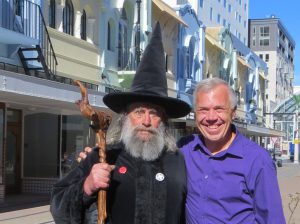 Jim (right) and the Wizard of Christchurch

For starters, we need to stop talking about everyone’s glass being half-full. True, all people have valuable skills, knowledge and other gifts. But, the notion that everyone’s glass is half-full reinforces the myth that we all have the same opportunities. It ignores the fact that privilege based on race, class, gender and other identities gives some people an incredible advantage. The obscene concentration of wealth [in one part of society] and mass incarceration of African Americans (in the United States) are two manifestations of the extreme inequity in our society.

It’s not enough to be community-driven; we need to ensure that those who are less privileged are in the lead. As many community organizers have observed, “It is those closest to the problem who are closest to the solution.” Inclusive engagement won’t happen unless we are intentional. We need to engage people where they are – their networks, gathering places, language, culture and priorities.

While emphasizing that there is no substitute for community, we need to acknowledge that there are some things best done by government, not-for-profits and other agencies. Portraying them as the problem aligns us with the right-wing. Similarly, a solely strengths-based approach echoes the conservative notion that people can and should pull themselves up by their own bootstraps. Appropriate professional services are needed, and agencies can be good partners. We must help them work in ways that are more strengths-based, holistic and community-driven.

At the same time, we must embrace the idea that a key role of community is to hold government and corporations accountable. Thus, we shouldn’t be content with organizing for mutual support. We must also organize for social and earth justice. The networks built through a CLD approach could make a powerful impact on external forces, but typically, we miss that opportunity as we focus on self-help.

As we work to make our communities stronger and our neighborhoods more attractive, we must recognize that our actions are likely to make local real estate more desirable and thus less affordable for existing residents and businesses. That’s hard to imagine when conditions seem desperate, but that is exactly the time when we need to plan for the future. As we’re working on small projects, we should be consciously building the capacity to establish cooperatives, community lands trusts and other forms of community ownership. We must also organize for a living wage and ensure that government and developers act in the interest of the community, especially those at greatest risk for displacement.

Just as it is important for those practicing ABCD/CLD to be open to community organizing, my friends who are organizing for social justice would do well to encourage their members to engage in mutual support and other ABCD activities. I’ve found that this is a great way to develop a much stronger base, especially among those people who are averse to meetings and conflict. Then, when it comes time for the fight, the members of the organization don’t have to yell so loudly because they have the whole community with them. Including an asset-based approach also provides opportunities for members to sustain their relationships with one another during those times when they aren’t involved with an issue campaign. ABCD and issue-based organizing are incredibly compatible, but few organizations utilize both approaches.

And, just as communities need to find ways to partner with government and other agencies, it is incumbent on elected officials, civil servants and not-for-profit staff to step back and make room for community. Ironically, many of my progressive friends are some of the biggest obstacles. They seem to think that people’s welfare is tied exclusively to rights and services, and they fail to acknowledge the vital role of community. It is a grave injustice when people are treated only as clients and customers and not as citizens with gifts and capacity. Government officials often have a paternalistic attitude towards the community and don’t sufficiently value its knowledge or trust its judgment. They have a skewed sense of power and guard it selfishly while failing to recognize that power is infinite and grows as you give it away. Social justice has always depended on the power of the people. Now, more than ever, progressives need to act on that truth.

Jim has kindly allowed us to republish this (edited) piece, originally released on his blog.

Want to know more about Jim and his work?

Dive deeper into specific tools and approaches with FREE 1:1 support with an experienced CLD facilitator. Get support as and how you need it for your CLD work. Our one-hour 1:1 Kōrero provide you with access to expert advice on the specific tools and practices relevant to your organisation, project or desired outcome.

This article discusses the science shaping CLD, the many world views of Te Tiriti and re-imagines crown and community leadership. This is followed by an example from Pam Armstrong from the Whananaki Community-led Development Group.