Like Inspiring Communities, Grey Lynn 2030 is celebrating its 10 year anniversary this year! We spoke to Brigitte Sistig and Colinda Rowe about how the organisation started, what it focuses on and where it’s headed.

Like Inspiring Communities, Grey Lynn 2030 is celebrating its 10 year anniversary this year (2018)! We spoke to Brigitte Sistig and Colinda Rowe about how the organisation started, what it focuses on and where it’s headed. 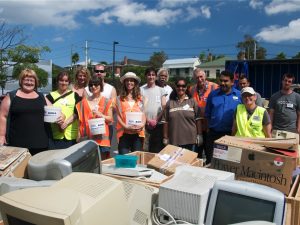 Grey Lynn 2030 started out as a couple of locals talking about what they could do to support a healthy local environment and community. At a public meeting in 2008, the Grey Lynn community created a vision of how their neighbourhood could look if it was more self-sustaining, relied less on fossil fuels and imported goods, and created less pollution.

The community wanted a local market, greater biodiversity, safer streets, community gardens, local waterway restoration and to know their neighbours. So they drew up a plan and Grey Lynn 2030 was born!

Grey Lynn 2030 (GL2030) is part of the Transition Towns movement, which is about communities coming together to address big challenges by starting local. The movement has a major environmental focus, and this is evident in everything GL2030 does.

Brigitte Sistig, the Chair, explains that being a Transition Town means that “any initiatives and solutions come from the community”. To achieve the community’s vision, they set up several focus groups around waste, energy, urban environment and more. Out of these groups have come many interesting and popular initiatives. In 2009, the first major project was an E-waste Action day. Over 12 tonnes of computer equipment was collected and diverted from landfill.

Also in 2009, a Farmer’s Market was established and has steadily grown in popularity over the last decade. The market has a strong commitment to becoming zero waste. Workshops are frequently offered during market hours, which provide an opportunity for GL2030 to share ways of getting involved at a local level. GL2030 also launched a website and a monthly newsletter to further spread the word. 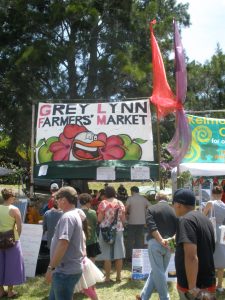 Brigitte finds it rewarding to see things changing in the community. “To see the community coming together at the Farmer’s Market every Sunday morning is inspiring. People can learn where their food comes from and connect with friends. It’s a real community place”.

Colinda Rowe, who moved into the area in 2009, became involved with GL2030 as she wanted to “get connected” to the neighbourhood. She became a Trustee in 2012, was Chair for four years and is now the Treasurer. “I’ve met some wonderful like-minded people who are now good friends and I love being able to go to local places such as the Farmers Market to catch up with them – it makes me feel like I live in a village within a city”.

Work with diverse people and sectors

GL2030 is a great example of using collaboration to help achieve your vision. “Often, with grassroots initiatives, when people have a good idea they are ready for action, but sometimes there can be a time delay, due to the processes Council needs to go through” says Brigitte. “In this situation, it’s important to keep the vision, the interest and the group’s energy going.”

In 2015, GL2030 worked with the Earth Action Trust to secure funding from Auckland Council’s Waste Minimisation and Innovation Fund to set up a one-year trial Resource Recovery Centre, which opened in 2017. During that year, the RePurpose Community Recycling Centre diverted 10.8 tonnes of waste from landfill.

GL2030 holds Green Screens film nights which involve inviting a local speaker along, watching an environmentally-themed movie and discussing it afterwards. Brigitte has found that these sessions are “a real catalyst for action”.

Earlier this year, GL2030 held its first Trash to Trade competition showcase, in collaboration with Waitematā Local Board and the Grey Lynn and Kingsland Business Associations. Brigitte explains “Local businesses offered up their business waste, in keeping with sustainable business commitment, supporting emerging up-cycling artisans to create new works. The event attracted fantastic upcycled entries and stimulating conversation between artistic makers and experienced business managers. Listening to the stories of the makers was a highlight of the event.” This project has strong support and will continue next year.

“It’s a continuous learning process” says Colinda. Grey Lynn 2030 “has enabled people in our community to action their ideas by providing a place of incubation and support for initiatives as well as a legal structure to allow for funding to be requested for these projects” she explains. 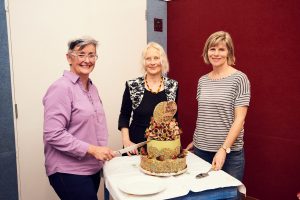 Lynn Green, Brigitte and Colinda cutting the cake at the 10 year celebration

So what does the future hold?

GL2030 has plans to revive and reconnect some of the groups that have gone in different directions. Specifically, they want to focus on finding local solutions to the energy crisis and are aiming to continue with local food production with their Food Forest project. There are also plans for a more permanent Resource Recovery Centre in Western Springs and more local upcycling initiatives.

There aren’t as many Transition Towns now, but Brigitte thinks there could be a revival on the horizon. “People are noticing that climate change is real. I have a sense that there’s a new movement and more people will want to become involved. People are realising that it actually takes personal change as well”.

Colinda says this is just what they need. People power! She talks about how vitally important it is to have a good volunteer base. She strongly recommends that other communities start Transition Towns in their area because “meeting new people and growing new friendships whilst doing something positive for your neighbourhood and our planet is extremely rewarding”.

Grey Lynn 2030 has published a book about their journey over the last decade. You can order a copy here.

To find out more about Grey Lynn 2030, go to their website.

Learn more about their Trash to Trade project by watching the following awesome video.

The Trash to Trade Competition