We decided if we were to get more people involved in being active, we needed to act differently. The Upper Hutt City Council decided to take on a more community-led focus which would involve making some of those same mistakes, but this time to learn and tell others about it. 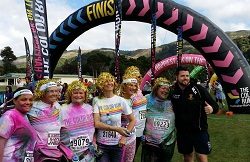 Our role is to support people to be more active, because we know that if people are more active it impacts positively not just on their physical health but also on their mental well being. To date we found that agencies, including local government, were rolling out the same types of programmes over and again – with little success. We decided if we were to get more people involved in being active, we needed to act differently. We decided to take on a more community-led focus which would involve making some of those same mistakes, but this time to learn and tell others about it.
What happened
We developed the ALIVE project. ALIVE is aimed at breaking down the barriers that prevent people from participating in regular active recreation. After a few false starts and a number of staff changes, we got underway. We employed a Team Leader and a Coordinator and it took off.
We identified key groups we needed to focus on such as senior citizens, young women, youth and middle-aged men. We wanted the ideas & activities to be created and designed by them, our local residents. We ran focus groups, all designed differently as it worked for them. For example a group of senior citizens were already meeting in the library doing theatre sports every week –we went along and asked them what they did, and what they would want to do, if anything.

A walking group was created with a social aspect; their walk involves having a drink at a café. The walking group grew as participants talked to other locals. And it changed. Some of the walkers decided to cycle instead. We also added to it, to give them a new experience we included Nordic walking which has now become part of some of the group’s activities.
The ALIVE Coordinator had a number of conversations about how we could work alongside young people. Figuring out where the barriers stood, she decided to go beyond mainstream education facilities eventually landing in the Teen Parent Unit (TPU) at Heretaunga College. They welcomed the chance to get back into some kind of organised activity, this recognises the massive change to their lives after baby is born, often they are more isolated. They wanted their baby included on many occasions – something to build activity into both mother and baby’s lives. One example: parent and toddler pool sessions.

Developing from this some of the TPU mums applied for and received grants from our Sporting Chance fund that helps pay the costs of organised sports, so they were re-engaging in sport.
Adding more value is the greater engagement between the mainstream school and the TPU – where they never met before, they are now coordinating events together.
We are ow also talking to the Marae, and a local youth worker to research new options.

The change we have noticed
We have noticed that our goal of increasing participation in physical activity through our local residents has spread to other aspects; social engagement has grown for instance. The walking group now meet about 3 times a week. Local residents are re-engaging them with their communities.
There are natural leaders that just need support to step into leadership. In one case we identified a person from one of our groups and gave her leadership training, she now runs her activity.
We haven’t got as many men involved as we would like and we have noted that is most likely because we need to find a different way again of working alongside them.
What we’ve learned
Doing this well takes time. Having the right people in the right places is vital. One size doesn’t fit all so having people that are passionate and comfortable working with locals, that they work to their strengths and feel part of the group. This may mean having a number of coordinators vs one but it makes a huge difference.
As a sector we make quite a few assumptions. We talk about money being the biggest barrier to getting people active but we need to re-define this. Walking doesn’t cost money. We can’t just assume what the barriers are. We need to break down stereotypes, find out what our local residents want and then get alongside them and do it.
We know there is a lot more we could notice and learn from ALIVE. We are now undertaking a gap analysis which will inform a wider evaluation of the programme enabling us to adapt it and make it even better.
The best thing we did was ask the people what work for them – we didn’t assume what they wanted.

Read more about how the team at the Upper Hutt City Council is helping the community to become more active.