Walk with us Albany

The first session of Walk With Us Albany attracted a group of 20 new migrants of different ethnicities! This grew further and led to a greater sense of belonging amongst the group and a stronger connection with their new community

The 2013 census showed that around 25% of the Upper Harbour community identified as being Asian. This is a group that is often under-represented in sport and recreation participation, and has been a community of focus for the ActivAsian project.

What we have done

In May 2016, Harbour Sport’s ActivAsian team started a small weekly walking group to provide new migrants in Albany with the opportunity to explore different walks, reserves and parks in the community. This was led initially by Shoko – our Japanese intern who initiated the group, but more recently by Tingting, who started as a volunteer Chinese interpreter for the group, and is now spearheading the project. We were excited when the first session of Walk With Us Albany attracted a group of 20 new migrants of different ethnicities – Chinese, Korean, Iranian etc. Little did we know that the group would soon grow to an average of 40 participants each week, even attracting over 20 participants on rainy days.

Who’s been involved and how?

With the group being so large, Eva, John and Lucy who were participants of the walking group stepped up and volunteered to manage the group for us, working closely with Tingting to ensure the group is safe and looked after. We also have other local groups involved – Laure, the Albany Newcomers Network Coordinator has also been a great supporter and regular participant of the group, bringing along their members, and helping with group management.

Tingting, who herself is a new migrant from China, took the initiative to not only test out each walk before walking day, but also research the history of each walk. She conducts ‘Tingting’s English class’ weekly in our WeChat group to teach English words that walkers may see on signs throughout the walk, and at the same time educating them about the environmental and historical significance of each walk. She has also led walks to the Albany bus station (teaching our new migrants about the public transport system in Auckland), QBE Stadium tour, Massey University tour, and organised indoor activities for rainy days. Each week, Tingting and our volunteers will ask for feedback from the group, and together they will plan for the following week based on this.

We have noticed a great improvement in the fitness of our walkers, with walks being further each week, and now a second walking day being initiated for faster walkers. There has also been a greater sense of belonging amongst the group and a stronger connection with their new community. Many of them have expressed gratitude towards Shoko and Tingting for their warmth and personal interest in ensuring the group gets a lot out of each walk.

Our coordinators’ characters and their ability to build strong positive relationships have been integral in the success of this project, and the willingness of our volunteers to go above and beyond what is expected of them to assist them. The group has really bought into the project and has made it their own. As an organisation, we have learned that our role is not to dictate what is provided to the community, but rather to act as facilitators and enablers of community driven projects. Walk With Us has been a great learning opportunity and further demonstrates that a community project can take on a life of its own when it is driven by the community. 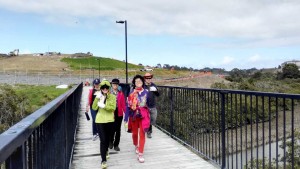 We are now looking to deliver two Outdoor Bush Leadership Courses to our local residents who may be interested in leading their own walks or volunteering for us. This will equip them with the skills required to safely lead walks, whether it is within their own community groups or families.