AgeConnect: looking out for our older generations

AgeConnect Nelson Tasman is an initiative started by Age Concern Nelson Tasman to support the older generation living in the area by asking the community themselves for ideas.

“This is not just about nice fluffy stuff, this is about health and wellbeing.”

Caroline Budge, Manager of Age Concern Nelson Tasman, is passionate about giving a voice to the growing older population of New Zealand.

Based in Nelson, she heads up the region’s branch of the nationwide organisation.

“Nelson is up there in terms of its ageing population. Its climate and quieter pace attracts people for retirement.” 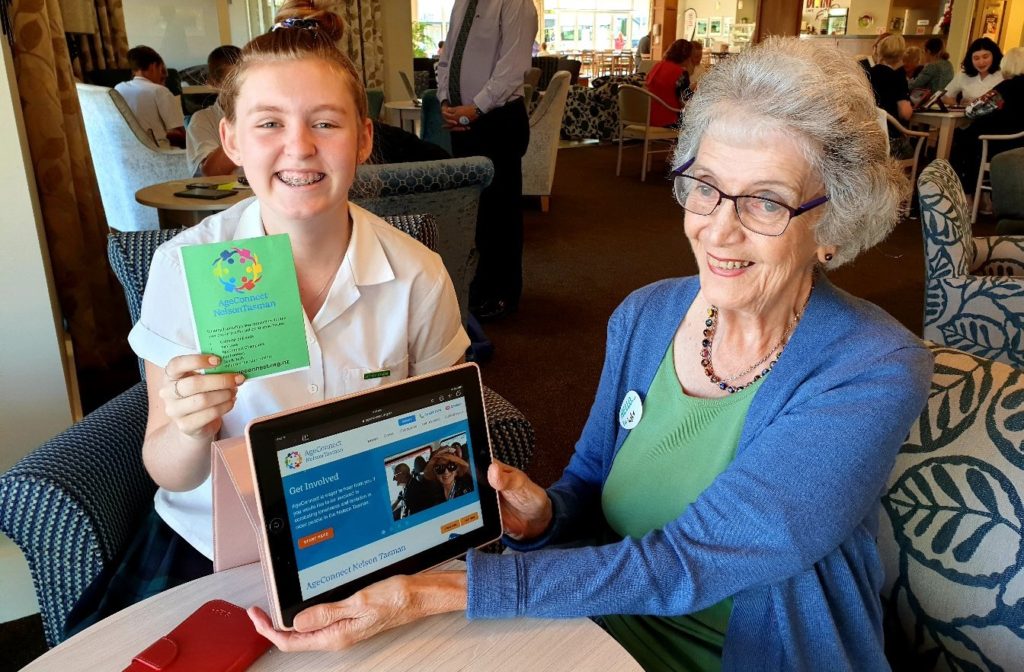 Tea & Tech – where learning and bonding happen together!

According to international, as well as national, research social isolation and loneliness has a huge impact on physical and mental wellbeing. ““There’s research to suggest that chronic loneliness is akin to smoking 15 cigarettes per day. Think of the impact that’s having on people’s wellbeing and on our health system. Ultimately the goal is to keep more older people away from the doctors and hospital because we can do something about it.”

Caroline and her team are doing exactly that.

“It started with companionship. We offer a visiting service using volunteers to go to people’s homes. Mostly they are people in their 80s and 90s who are stuck at home. But a couple of years ago we started thinking about those who feel disconnected in some way but who aren’t maybe old, or who want to be connected and out and about in the community.”

Caroline explains that loneliness isn’t something that happens just for older people – it can happen at any age. However the options for younger people to seek help and integrate into their communities are much more accessible.

“So we ran a test. We asked our community what they thought, and we had a huge response.”

Reaching out to local health professionals, councillors, community leaders and business owners, Caroline and her team were hoping to get a wide range of interest and input into what Age Concern Nelson Tasman could do next.

So huge was the response to the first invite-only meeting, with a turnout of 60 people, that they hosted a second meeting – this time opening it up to the wider community. That meeting attracted 100 interested people of varying ages and occupations.

“From there we figured out who was really interested in getting involved, identified our top issues to address, came up with themes,  and set up working groups. Then we realised it was enough work to create a new job. We funded and then recruited a position to help support collaboration and make things happen. Therefore AgeConnect Nelson Tasman was born. At the time we had no idea what this person was going to do but knew that it was about  working with others to tackle social isolation and loneliness and that some exciting innovations would occur.”

With people on board and ideas in hand, the team’s priority was to put things into action. One of the first initiatives to get off the ground was Tea & Tech – a regular learning session between residents of a local retirement village and teenagers from the Nelson Youth Council. The idea was to help older people on a 1:1 basis with their digital devices – smartphones, tablets and PCs. They could ask practical questions that would be answered by knowledgeable teenagers, who would in turn get to practise their training and explanation skills.

“When instructions say ‘just go to our website’ it becomes a huge barrier for anyone who doesn’t know how to use a website. We hoped it would be practical learning for everyone involved but what we found was that connections were made and bonds were formed. The teenagers showed real leadership and commitment, and older residents got much more than digital skills out of it too. Often what the older people want is something really simple – they might not really know what wi-fi is, for example, or how to share photos. The results are quite magical.”

Two years on, AgeConnect is busier than ever – facilitating new initiatives and encouraging the community to take on ‘doing the doing’. Tea & Tech has now been taken up by three local high schools, two other retirement villages, with plans to run them in the community as well.

Pet Connect is another initiative that has been very successful. 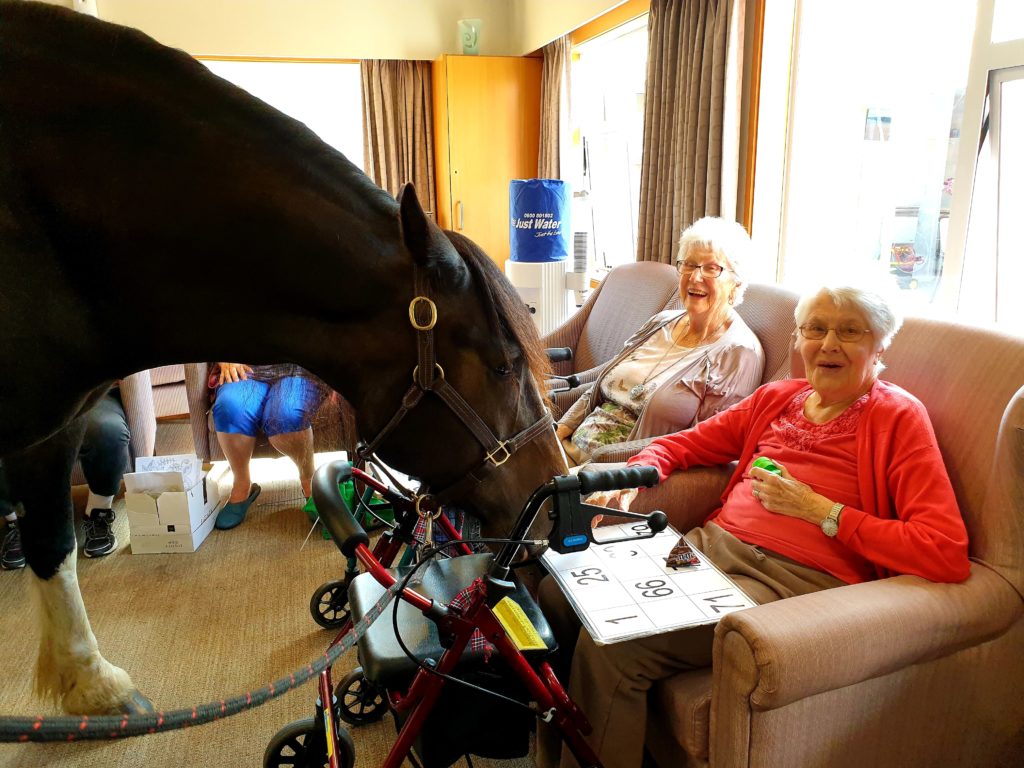 Mostly it’s dogs that their volunteers take in to visit the residents, but there has been a surprise superstar. “Tyson the Clydesdale horse, whose owner is a local woman who’s happy to volunteer her time, seems to be able to sense something in people. He’s huge, but he walks down the corridor of the rest homes. It’s amazing. He gently nuzzles people and seems to know who needs the most attention.”

For some residents of care homes who’ve spent their lives on a farm, and are now living in the city with next to no animal contact, Caroline explains how this initiative has brought incredible joy to those who’ve missed the smell and presence of animals in their lives.

“It’s moved people to tears. It’s just a short few moments that they get with Tyson but the joy it brings to some residents is medicine itself.”

Something else that was able to be put into action quickly was the connection between the need for community transport for older people, and the number of existing vans and volunteers who were available to help. This has been a quick win-win for all involved.

Caroline says it’s been incredibly encouraging to see the way in which the wider community has embraced these and other initiatives.

“The idea behind what we’re doing is to get initiatives off the ground and help facilitate them, then we work with the community to take charge and run with them.”

As well as focusing on specific initiatives such as Pet Connect and Tea & Tech, AgeConnect also developed what they call AgeConnect Champions – anyone in the community, whether an individual, group or business – who are doing their bit for older people.

“This might be a sticker on the window to let people know they’re age friendly, or a chair to sit down on while they wait somewhere. Things that aren’t mainstream, but that make all the difference to someone’s day when they’ve made the effort to venture into town.” 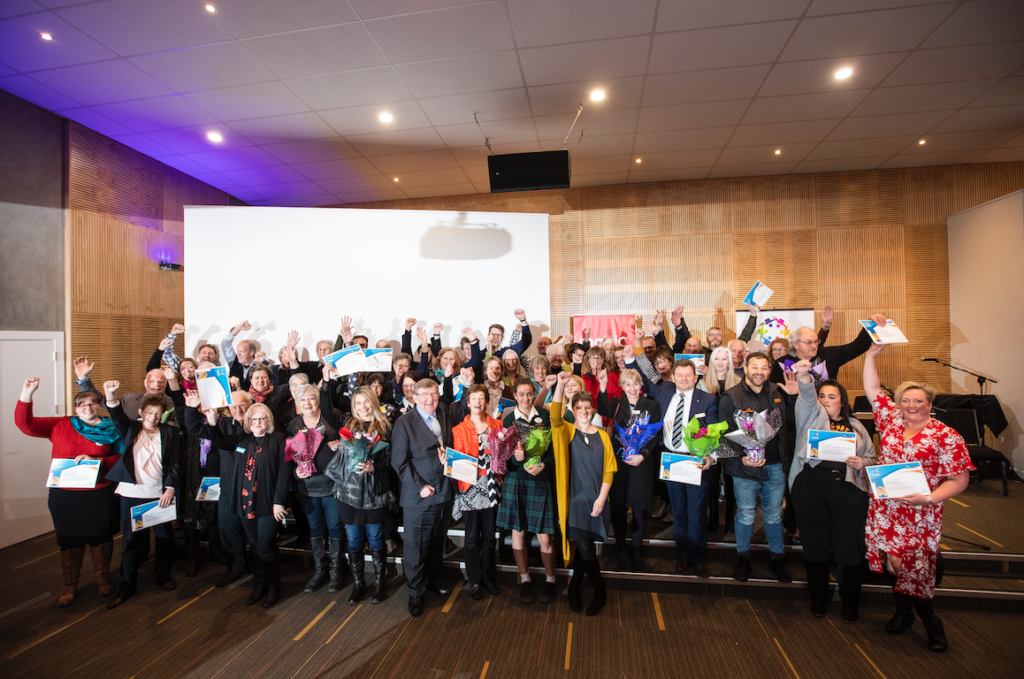 They have also established an annual awards ceremony for nominated Champions, recognising things such as being physically accessible, offer great customer service, or promoting intergenerational activities.  Just recently they recognised 150 Champions at their Awards, sharing stories of kindness and examples of great community work.

By encouraging local businesses to get on board and be recognised for their efforts, Caroline says it has begun to instil an expectation that local businesses should be prepared to do what they can for the region’s ageing population.

Not only to encourage inclusivity among the retail and service industry, but to ultimately have a positive impact on someone’s life.

AgeConnect is a concept that is now being picked up by other communities and Age Concern branches which, given New Zealand is home to many communities that are similar to Nelson, is a brilliant example of community-led development in action.