Community at the heart for Point Chevalier

Project Background
In 2017 the Albert Eden Local Board allocated funding for “the coordination and activation of a placemaking initiative in Pt. Chevalier focused on the town centre”. The aim was to revitalise the Point Chevalier town centre into a vibrant and inclusive space.

Some challenges like poor town planning, local building expansion and development and reduced community policing were historic. Others, like poor media portrayal of the town centre and issues with social behaviour and rough sleeping, were just emerging. 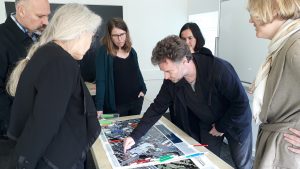 Finn Mackesy is no stranger to the Point Chevalier community, having co-founded Transition Point Chevalier and co-coordinated the Point Chevalier Treasure Hunt a decade ago. He also works at Resilio Studio. As well as landscape, urbanism and architectural design, Resilio’s focus is on social innovation, education and facilitation. They support a range of projects in Tāmaki Makaurau, from public open space development to curriculum development, placemaking, social labs and community empowerment. Finn and his team are driven by the desire to support Auckland communities and focused on solutions that encompass positive and transformative change. They wanted to be part of this project so they took on the role of coordinating and facilitating a co-design process with other stakeholders in the community.

Work with diverse people and sectors

A key characteristic of CLD is working with a diverse range of community stakeholders, so the project team intentionally included local council staff along with local organisations, businesses and residents in their core group.

“The ideal situation is to collectively define what the problem is and the challenges you are taking on. Then you are sharing the work in terms of trying to understand and analyse those problems and collectively generate solutions” explains Finn.

Resilio Studio and its Placemaking Project partners spent several months researching, networking, observing and mapping the area. They started by “focusing on the known issues, impacts and concerns” and went from there. Their purpose was to “work together to improve the experience of living, working and playing in and around the town centre”. The second stage of the project is to focus on the activation of the local square and working to improve connectivity and safety in the town centre.

Throughout the process there were ongoing opportunities for the project group to meet with influencers and decision makers whose work impacted on and continues to influence Point Chevalier.

Finn says a significant highlight was witnessing “the placemaking group becoming the local experts on local matters and having influencers and decision makers coming to them for information, insights and perspective”.

Community-led development has informed Resilio Studio’s business practice since they began three years ago. Inspiring Communities has provided a source of inspiration and models of good CLD practice which continue to shape the way it works and the way the Point Chevalier Placemaking Project operates. 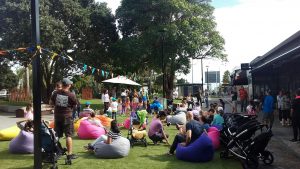 It can be difficult in this type of project to translate outcomes into numbers. Many changes will be gradual, rolling out over a 10 year period, but will be influenced by decisions made in the immediate and short term.

At the beginning of the project, few people seemed to “appreciate the scale of change happening in and around the town centre”, according to Finn. However, as community engagement progressed, a shift in focus occurred from “trying to improve existing public spaces to influencing and helping the community to shape coming changes to best serve the community”.

You can find more about this awesome project here.